I was some time since the last update on my URU Key project. However, the project did not stop, no.

As you might know, Google has dropped support of BLE authenticators in the Chrome browser. What they said this winter:

BLE authenticator support in Web Authentication has been available behind a flag for over a year, but it still tends to be buggy in regular use and there isn’t a strong demand for it

The actual change came to my computer somewhere in April and as a result, it became a huge impediment in the process. I do not know if it’s a permanent change and BLE authenticators will not be available in Mac OS and Linux at all, or the support will be moved to the level of the operating system, as it is done in Windows. So, the future is unclear now. Yes, Windows still supports BLE authenticators and the support of BLE transport was not removed from the version 2.1 of FIDO2 specification.

Some time ago I have contacted Fingerprint Cards and finally, I have received a bunch of documents and samples on their fingerprint scanners. It’s a huge step forward as now I am able to implement biometric user verification in a proper way and it should take way less time and effort than figuring out everything by myself. On the other hand, now I’m bound with NDA and can not publish any details of this implementation.

Recently I was asked if the URU Key can be used as a sign-in method in Windows. Really interesting question and I did some research to figure it out. There are some specific requirements which were not implemented on my side, but after making them available I could connect the URU Key and Windows Hello. 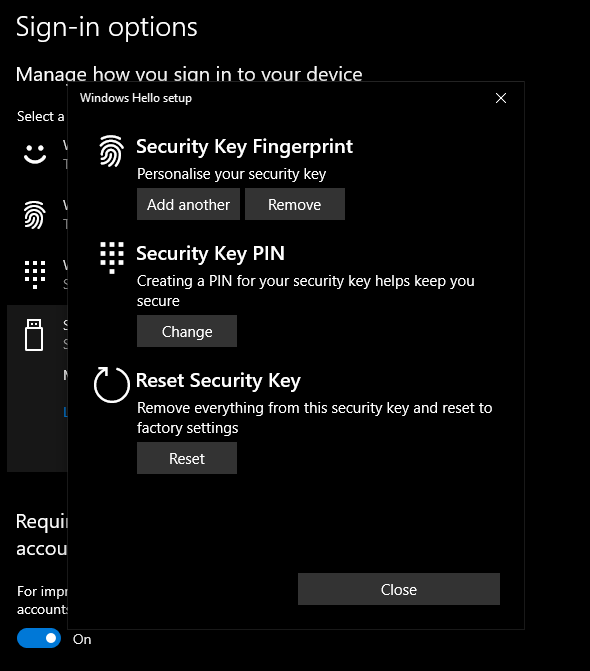 The new specification of FIDO2 introduces new commands for fingerprint and credential management and after implementing one can use URU Key for signing in to their Windows computer. Securely and wirelessly.

Since starting the FIDO2 project I received a lot of requests to make it open source. Unfortunately, it’s not that easy to do - I am using ESP IDF framework which is hardly suitable for beginners and now biometric part is covered with NDA. The components are packed quite dense and it’s difficult to solder.

Nevertheless, I have plans to publish a new spin-off project - simple wireless authenticator with open-source hardware and software. Stay tuned!

The new form factor for the URU Key FIDO2 Authenticator